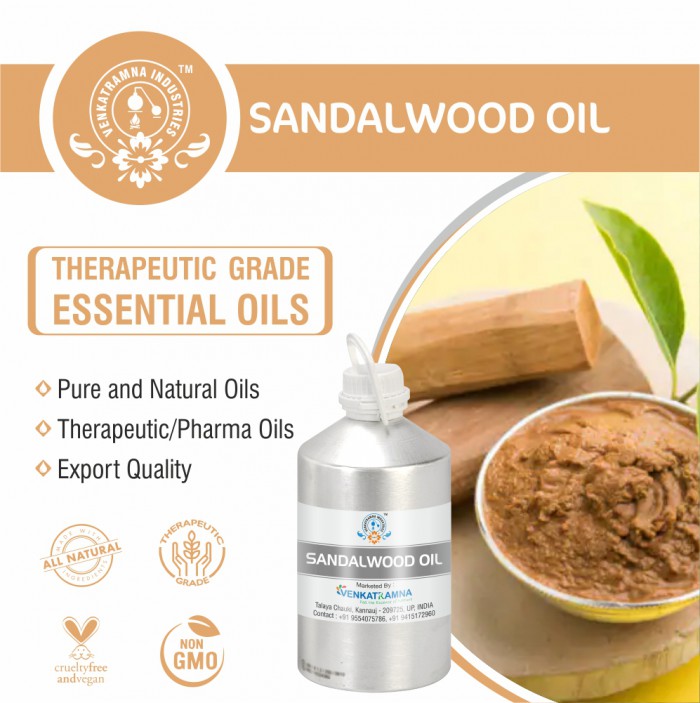 Sandalwood oil, distilled from the heart wood and roots of the sandalwood tree, is one of the most valuable essential oils, valued by perfumers for its woody notes, providing a deep rich base note to perfumes and acting as a natural fixative. In addition to acting as a feed stock to produce the essential oil, the wood is also valued for carving, and furniture making. Rising demand and very high prices for both wood and essential oil, a slow growing tree which takes 30 to 60 years to give a crop.

Sandalwood oils come from a range of species, and while they all have similar uses, quality and characteristics vary between the oils of the different species. The key species used for distillation of essential oils are listed below, with East Indian Sandalwood oil and Australian Sandalwood oil dominating supplies to the market:

Our Oils are therapeutic grade and they are highly refined to match the pharmaceutical guidelines to be used in the formulations.

Sandalwood is a tree which is widely cultivated for its fragrant essential oil. More than the pleasing scent it gives, sandalwood oil is also said to bring benefits not just to our body but to our general well-being as well.

Sandalwood oil is one of the most important essential oils in the world. It offers multiple uses including perfumes and cologne, medicine, soaps, skin care products, and incense. Sandalwood oil is also popular in aromatherapy where it is reputed to bring relaxation and alertness in the mind.

The oil has great application in perfumery and cosmetics. The oil is also used in making agarbatti’s for incense. No other wood is most closely tied to religion and spirituality than sandalwood. Apart from its spiritual and historical significance, sandalwood is also known for its extreme usefulness. Whether you use it for aromatherapy, for perfumery, for skin care, for treating illnesses or for incense.

·        Information on the likely routes of exposure: Skin/scalp contact.

·        Symptoms related to the physical, chemical, and toxicological characteristics: None known.

·        Irritation of the eye if exposed: Redness of the skin if irritated.