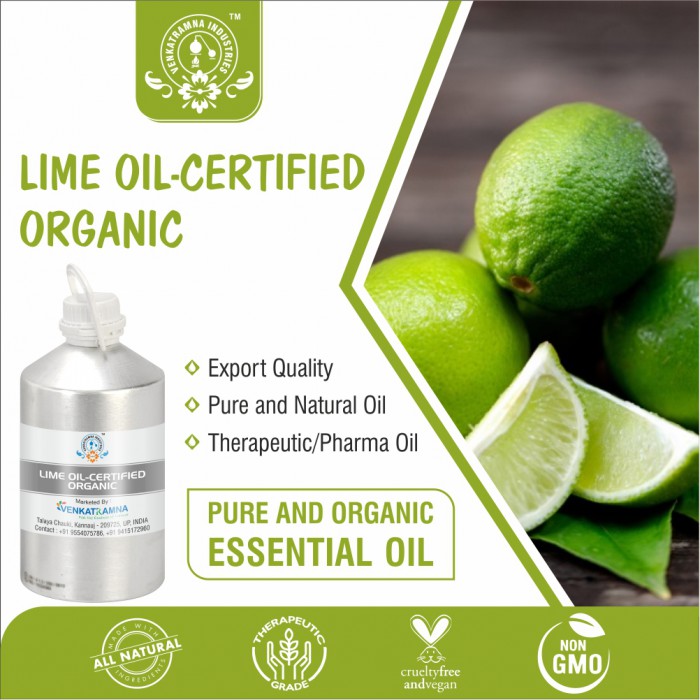 Citrus aurantifolia (Christm) Swingle (C. aurantifolia) is a polyembryonic plant cultivated in many countries all over the world and grows in hot subtropical or tropical regions such as Southern Florida, India, Mexico, Egypt, and the West Indies. Lime Essential Oil is amongst the most affordable of essential oils and is routinely used for its energizing, fresh and cheerful aroma. It is well known in folklore for its ability to cleanse, purify and renew the spirit and the mind. It is also said to be effective in cleansing the aura. Lime essential oil is rich in Vitamin C, making the oil an ideal immune system booster. Lime can be used in a diffusor or vaporizer to assist with relief from stress, anxiety, and allow for a calm mind.

It is an important medicinal and food plant widely cultivated in many parts of the world. It is valued for its nutritional qualities and numerous health benefits. The plant is used in traditional medicine as an antiseptic, antiviral, antifungal, anthelmintic, astringent, diuretic, mosquito bite repellent, for the treatment of stomach ailments, constipation, headache, arthritis, colds, coughs, sore throats and used as appetite stimulant. These health benefits of Citrus aurantifolia are associated with its high amounts of photochemical and bioactive compounds such as flavonoids, limonoids, phenols, carotenoids, minerals and vitamins.

Although the precise origin is uncertain, wild limes are believed to have first grown in Indonesia or Southeast Asia, and then were transported to the Mediterranean region and north Africa around 1000 CE. To prevent scurvy during the 19th century, British sailors were issued a daily allowance of citrus, such as lemon, and later switched to lime. The use of citrus was initially a closely guarded military secret, as scurvy was a common scourge of various national navies, and the ability to remain at sea for lengthy periods without contracting the disorder was a huge benefit for the military. The British sailor thus acquired the nickname, "Limey" because of their usage of limes.

The chemical composition of C. aurantium is responsible for health-promoting effects. The chemical composition includes vitamins, minerals, phenolic compounds, and terpenoids. Among the diverse chemical components in C. aurantium, flavonoids belonging to phenolics have been recognized as important due to their physiological and pharmacological role and their health benefits, include anticancer, antianxiety, antiobesity, antibacterial, antioxidant, pesticidal, and antidiabetic activities.

Lime Essential Oil is usually utilized as a flavoring and acidifying agent for food. Besides the essential oil and its components, the fruits of C. aurantium are sources of flavonoid-type compounds with diverse biological effects. Additionally, it was reported that flavonoid glycosides were isolated from the plant and the biogenic amine and flavanone contents have been determined. Due to the abundance of health-giving secondary metabolites

·        Cautions (dermal): If applied to the skin at over maximum use level, skin must not be exposed to sunlight or sun bed rays for 12 hours.

Old or oxidized oils should be avoided.

Because of its (?)-limonene content we recommend that oxidation of expressed lime oil is avoided by storage in a dark, airtight container in a refrigerator. The addition of an antioxidant to preparations containing it is recommended.

·        Adverse skin reaction: No irritation or sensitization data could be found. Expressed lime oil was phototoxic when applied to human skin. Photo toxicity is due to bergapten and other furanocoumarins. Bergapten is photo carcinogenic. Eleven cases of photo dermatitis from expressed lime oil have been reported, and photodynamic reaction was experimentally produced by expressed lime oil on the skin and subsequent solar irradiation. Auto oxidation products of (?)-limonene can cause skin sensitization

·        Carcinogenic/anti carcinogenic potential: Lime oil (type unspecified) has been reported as a promotor of tumors in the fore stomach and in the skin of rats pretreated with DMBA; most of these papillomas were benign, but a few were malignant. Lime oil was not mutagenic in the Ames test, and did not produce CA in Chinese hamster fibroblasts. Citral and (?)-limonene display anti carcinogenic activity.

Do not discharge into the environment especially not into waterways, sewers and the sea.

Do not release into the environment. Collect waste into suitable containers and contact hazardous chemical disposal company.