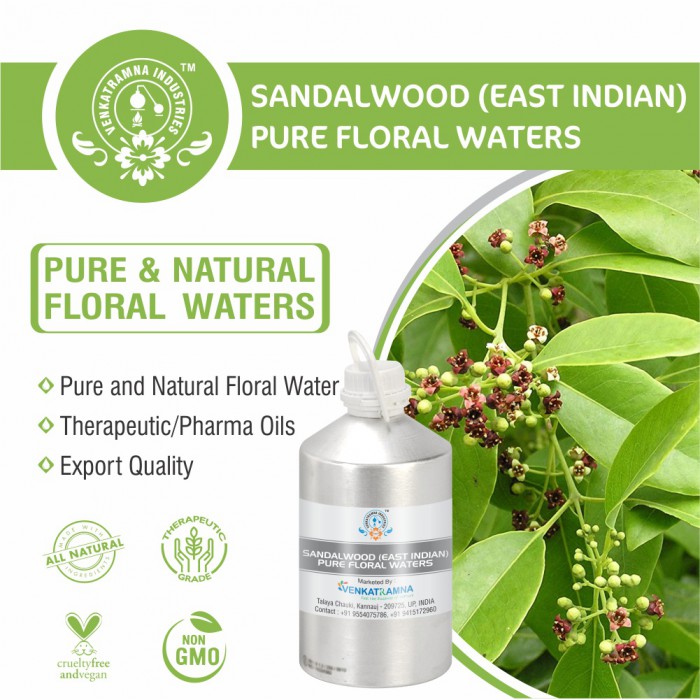 Sandalwood oil, distilled from the heart wood and roots of the sandalwood tree, is one of the most valuable essential oils, valued by perfumers for its woody notes, providing a deep rich base note to perfumes and acting as a natural fixative. Sandalwood oils come from a range of species, and while they all have similar uses, quality and characteristics vary between the oils of the different species. The key species used for distillation of essential oils are listed below, with East Indian Sandalwood oil and Australian Sandalwood oil dominating supplies to the market:

Also known as hydrosols, floral waters are actually a by-product of the steam distillation process used to capture essential oils. During a normal essential oil distillation process, the steam containing the oils is cooled to turn it into water, and the essential oils floating on top are skimmed off and bottled. The remaining water is considered floral water! Any floral water contains water, water-soluble components of the plant, and trace amounts of the essential oil. This unique composition lends each floral water a full spectrum of the essence and properties of the botanical material from which it was derived. Though they are most often called floral waters, hydrosols can be produced from any plant matter like herbs, needles, leaves, woods, barks, and seeds.

Floral waters have many valuable uses in beauty, skincare, haircare, and household products. At Venkatramna Industries, we offer wide range of floral waters for a variety of product applications. They can be sold as pure floral waters to be used as sprays and spritzers, or they can be strategically blended with other ingredients to create versatile consumer products.

·        Maximum Dermal Use Level: Not Established

·        Toxicity of the Products of Biodegradation: Not available