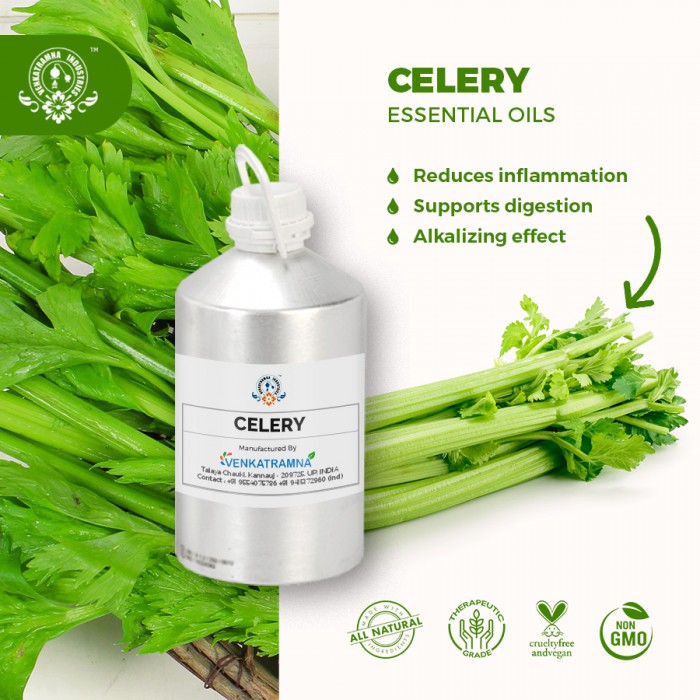 Apium graveolens, the botanical name of Ajamoda. This is also known as celery. It is annual or bionomical herbaceous plant. It is known to be the native of Mediterranean regions like Asia, Africa and Europe. It grows up to the height of 60 to 90 cm. the root system is of tap root system. Wild plants grow with fragrance and pinnately divided leaves. In other form, biennial form, plants have a basal rosette of leaves in primary years, later near summers, it florates in off white flowers in umbels. Umbels are with property of inflorescence. The flowers of the plants are so small with five petals of ovule shape within floured tips. The carpals of the flower are in semi trade sub pentagonal and filiform. The primary ridges of the carpals are very much distinct. The fruit of the plant is schizocarp (a dry fruit when ripe, splits into single seeded parts). These fruits are aromatic, 1 to 2 mm in diameter, with two mericarps, sub orbicular and ellipsoid. The color of the flowers are greyish brown. There is cross pollination found in this plant. Ajamoda is ancestor of two different kinds of crops.

Celery was first cultivated as a food plant in Europe, mainly in Italy and France. From here, the plant spreads to Sweden, Algeria, Egypt, and Ethiopia and then to Kingdom of Saudi Arabia (KSA). Central Region (Najd) is said to be the main geographical region of this plant in the KSA.

A. graveolens (Karafs) is being used as anthelmintic, antispasmodic, carminative, diuretic, laxative, sedative stimulants in the Arab traditional medicine.

A. graveolens is a biennial plant locally known as “Karafs”, belonging to family Apiaceae. Various parts of A. graveolens are used in hepatic and spleen disorders, brain disorders, body pain, and sleep disturbances. Celery has been used in the traditional system of medicine to treat spasm and stomach problems and as diuretic, laxative, and sedative. It is used as heart tonic to lower the blood pressure in African traditional medicine in Trinidad and Tobago. There is also a report to the use of celery in joint problems. The celery seed is well known as libido stimulant in the traditional system of medicine due to its protective role against the sodium valproate in testes and amplification of the sperm profile. It also increases the secretion of breast milk.

Celery also stimulates semen production and relieves offensive breath. Al-Rajhi said that one should avoid eating celery if he/she fears that he/she might suffer a scorpion sting. A. graveolens is a big source phenolic compounds, which provides a good source of antioxidants. The antioxidant activity of Karafs leaf was investigated (by scavenging of the 1,1-diphenyl 2-picrylhydrazyl [DPPH] radical activity) and found to be a strong natural antioxidant by inhibiting oxidant process. It may be attributed to its antioxidant constituents including L-tryptophan and derivatives of methoxy-phenyl chromenone. The seed oil of the celery has a strong larvicidal, adulticidal, and repellent activity against the Aedes aegypti larva, the vector of dengue hemorrhage fever. In another study, the mosquito repellent activity of celery oil (with 5% vanillin) was found better repellent activity than a number of commercially used repellent.

Celery is valued not only for its nutritional properties but also for the distinctive aroma which it owes to the presence of phthalide-rich essential oil. Thus, Apium graveolens is widely used as a spice and flavoring ingredient in food products. The current trend toward the use of natural preservatives triggered research on antibacterial, antifungal, and antioxidant properties of volatile oils, including celery.

·        Adverse skin reactions: Undiluted celery seed oil was not irritating either to rabbits or to mice; tested at 4% on 25 volunteers it was neither irritating nor sensitizing. It is non-phototoxic. Autoxidation products of (þ)- limonene can cause skin sensitization.

·        Reproductive toxicity The low developmental toxicity of (þ)- limonene in rabbits and mice suggests that celery seed oil is not hazardous in pregnancy.

·        Toxic to aquatic organisms, may cause long-term adverse effects environment. Avoid any pollution of ground, surface or underground water.