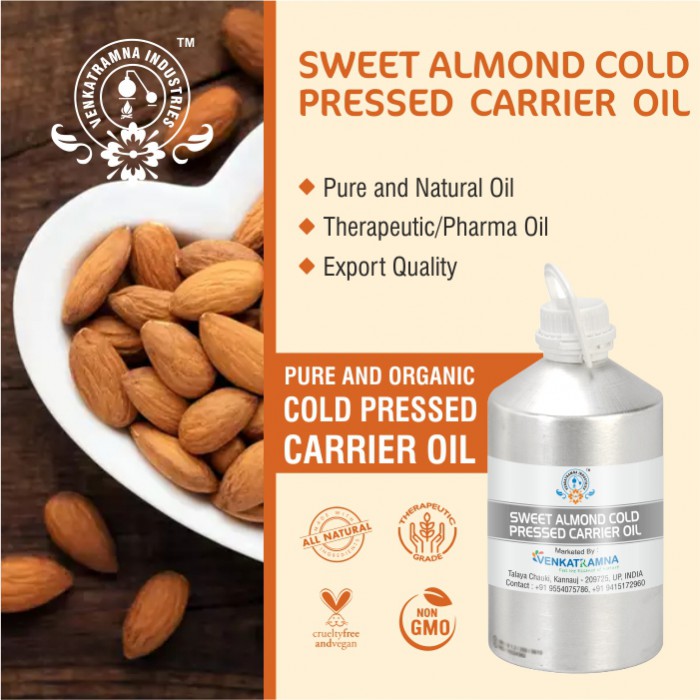 The bitter almond tree (Prunus dulcis, var. amara) also produces an almond, but broader and shorter in shape. From these is produced a lesser quality of the fixed oil along with an emulsion which yields glucose, cyanide, and the essential oil of bitter almonds, which is nearly pure benzaldehyde.

The health benefits of bitter almond essential oil can be attributed to its properties as a vermifuge, febrifuge, bactericidal, germicidal, fungicidal, sedative, anesthetic, aperient, diuretic, anti-intoxicating, anti-carcinogenic, and antispasmodic substance.

Almonds and almond oil date back to pre-biblical times and were mentions in the bible as well. The benefits of almond oil were well known in Greece and Italy prior to the Christian era. Almonds were mentioned in old Greek mythology, as well as in classical Shakespearean writings. Domestic almonds are said to have first appeared during the bronze age, between 3000 and 2000 B.C. and were one of the earliest domestic trees used for their seeds and oil.

Tree produce large, smooth almonds and offers 60-65% edible kernel per nut. The ‘tuono’ has thicker, hairier shells and offers only 32% of edible kernel per nut, but having a thick shell has advantages. The ‘Tuono’s shell protects the nut from threatening pests such as the naval orange worm. ARS researchers have managed to crossbreed the pest-resistant ‘Tuono’ tree with ‘Nonpareil’, resulting in hybridized cultivars of almond trees that are self-pollinated and maintain a high nut quality. the new, self-pollinating hybrids possess quality skin color, flavor, and oil content, and reduce almond growers’ dependency on insect pollination.

Essential oils are distilled from the aromatic leaves, bark, and roots of plants. If applied to the skin directly, they can cause reactions, such as severe irritation, redness or burning.

Carrier oils are used to dilute the essential oils and help “carry” them into the skin. Aloe vera gels and unscented body lotion are also sometimes used as carriers.

To be used in aromatherapy, it is recommended that the oil is obtained through cold pressing. In this process, the oil is extracted by crushing the plants. Users claim that the fragile nutrients in the oil can be damaged if they are extracted with heat. Venkatramna’s carrier Oils are extracted from the Cold Pressed method to retain their properties.

Benzaldehyde may be used as an adulterant of, or a complete substitute for bitter almond oil (Burfield 2003). Benzaldehyde is susceptible to autoxidation.

·        Adverse skin reactions: undiluted bitter almond oil FFPA produced hyperkeratosis and dry desquamation when applied to mice or pigs; tested at 4% on 25 volunteers, the oil was neither irritating nor sensitizing. It is non-phototoxic.