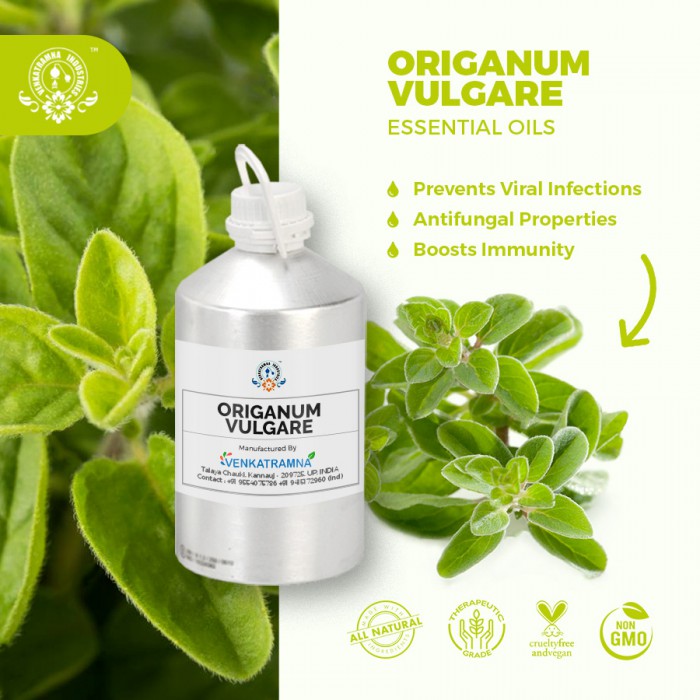 Origanum Vulgare is also known as Oregano and Wild Marjoram. The name originated from the Greek ‘joy of the mountains’ and is a common mint species family. It is native to the Mediterranean basin and Asia. It is a perennial herb which grows 20–80 cm tall, with leaves of up to 4 cm, and has purple, spikey flowers. Oregano has been a popular culinary herb in Europe since ancient time, and became popular in North America after WWII when returning soldiers posted to Italy brought back a taste for pizza.

Oregano was first used by Greeks since it was originally grown in Greece. They believed that this herb was created by the Goddess Aphrodite. She wanted it to be a symbol of joy growing in her garden. The word “oregano” comes from the Greek words oros, for “mountain,” and ganos, for “joy” meaning “joy of the mountains.

The ancient Egyptians used it in food preservation, and Hippocrates used it in his medical practice.

Origanum vulgare essential oil is antibiotic, antiseptic, antiviral and antifungal medicinal oil. It clears respiratory infections in a few days only. It is also a proven antifungal that can be used in the treatment of Candida Albicans. For fungus under the nails and on the skin, eczema and psoriasis it can be used diluted in olive oil with topical application, as well as in baths. It can be used for the treatment of rheumatic pains and muscle aches.

Origanum vulgare essential oil can heal all kinds of infections, viral, bacterial or fungal in nature. It is also a powerful analgesic and antioxidant, useful in muscular and rheumatic pains, stomach and intestinal upsets.

In foods and beverages, origanum vulgare essential oil is used as a culinary spice and a food preservative.

Origanum vulgare essential oil contains chemicals that might help reduce cough and spasms. It also helps digestion by increasing bile flow and fighting against some bacteria, viruses, fungi, intestinal worms, and other parasites.

Dermal - Hypersensitive, diseased or damaged skin for children under two years of age.

Safety advice Our dermal maximum is based on 87.8% total thymol and carvacrol content and a dermal limit of 1% for carvacrol and thymol to avoid skin irritation.

·        Adverse skin reaction: Undiluted Origanum oil was severely irritating to mice, and moderately irritating to rabbits. Tested at 2% on 25 volunteers it was neither irritating nor sensitizing. Origanum oil is non-phototoxic (Opdyke 1974 p945– 946). In a CAM (chorioallantoic membrane of the fertile chicken egg) assay, a model for detecting irritants, Origanum onites oil with 57.4% carvacrol and 11.6% thymol was strongly irritating. This irritation was due to thymol and not to carvacrol.

·        Reproductive toxicity: When Origanum vulgare oil was fed to pregnant mice for two weeks at 1,000 ppm (equivalent to 150 mg/kg), there was a related increase in the rate of embryonic cell death. Satureja khuzestanica, an essential oil consisting of 93.9% carvacrol, was given orally to pregnant rats during gestational days 0–15 at doses of 100, 500 or 1,000 ppm. There were no signs of maternal toxicity or teratogenicity at any dose, and in the two higher dose groups there was a significant increase in the number of implantation and live fetuses, a positive outcome.

·        Drug interactions: Antidiabetic or anticoagulant medication, because of cardiovascular effects.

Toxicity to microorganisms – No data available