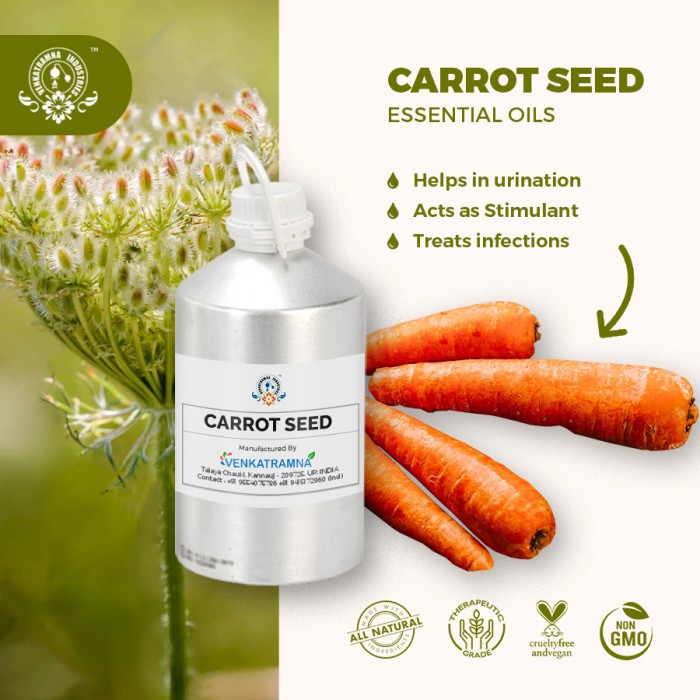 Carrot Seed Essential Oil is derived from the dried seeds of the Daucus carota botanical, more commonly known as the Wild Carrot or “Queen Anne’s Lace,” as it is referred to in Europe. Carrot Seed Essential Oil is commonly mistaken for both Carrot Seed Carrier Oil and Carrot Carrier Oil. The former carrier oil is obtained by infusing a vegetable oil with cold-pressed Wild Carrot seeds, while the latter is the result of infusing a vegetable oil with macerated Wild Carrot or Carrot root then straining it. Thus, both are infused oils, though one is infused with the seeds and the other with the root. The essential oil, however, is commonly steam distilled from the seeds.

Carrot is the one of the major vegetable crops cultivated worldwide. The domesticated types are divided into two groups: the Eastern or Asian carrots (var. atrorubens), with mainly purple and yellow roots; and the Western carrots (var. sativus) with mainly orange roots. Carrots were thought to be domesticated in Afghanistan as the primary centre of diversity and they were spread over Europe, Asia and the Mediterranean area, and the origin of western cultivated carrots were thought to be in the Asia Minor Centre, primarily Turkey.

Carrot Seed Oil has found uses in traditional Chinese medicine, which applies it as a bath or massage oil to address muscle pain or as an effective treatment for intestinal ailments such as dysentery and worms. It is also traditionally used in the manufacturing of perfumes to contribute its woody nuance to scents that are “Oriental” and “aldehydic.” When used in other cosmetics, it is a traditional and popular moisturizing agent for all-purpose body lotions.

Carrot seed oil is a type of essential oil. It’s extracted via steam distillation from the seeds of the Daucus carota plant. This flowering plant, known for its white blossoms and carrot-scented roots, is also called wild carrot and Queen Anne’s lace. Carrot seed oil is sometimes confused with carrot oil, which is made from a mixture of crushed carrot roots immersed in a carrier oil, such as olive or coconut oil. Carrot oil isn’t an essential oil, however. Cold pressed carrot seed oil is cold pressed from the carrot seeds, and it’s used in cosmetics for anti-aging properties in skin care. Carrot seed essential oil has shown antibacterial, antifungal, anti-inflammatory, and antioxidant properties.

The ethnobotanical uses of this species also included applications in the treatment of cough, diarrhea, dysentery, cancer, malaria, tumors, as an antiseptic, abortifacient, aphrodisiac, carminative, stimulant, stomachic and tonic. Daucus carota was used by the Ancient Egyptians as a stimulant, carminative, diuretic, anthelmintic and as a decoction for infantile diarrhea

Daucus carota was cultivated for the enlarged fleshy taproot, eaten as a raw vegetable or cooked in many dishes. Eaten sliced, diced, cut up, or shoe-stringed, carrots were used in many mixed vegetable combinations. They were sold in bunches, or canned, frozen, or dehydrated. They may be baked, sauteed, pickled, and glazed, or served in combination with meats, in stews, roasts, soups, meat loaf or curries. Roasted carrot was used as coffee substitutes. Essential oil was used to flavor liqueurs and perfumes. Seeds were aromatic, carminative, diuretic, emmenagogue, stimulant, and were used for dropsy, chronic dysentery, kidney ailments, worms, as aphrodisiac, nervine tonic, and for uterine pain. Roots were refrigerant and used in infusion for threadworm, as diuretic and eliminating uric acid.

Used in aromatherapy applications, Carrot Seed Oil is known to have stimulant properties that enhance circulation as well as brain and nerve functions. It boosts energy levels and promotes alertness. By stimulating the release of digestive fluids and enzymes, hormones, and the muscular contractions of the intestines, it maintains the efficient movement of the digestive system and the metabolism.

·        Contraindications: Prior to using Carrot Seed Oil, a skin test is recommended.

·        Serious eye damage / irritation: Liquid may be irritating to eyes and skin.

·        Toxicity: Very toxic to aquatic organisms, may cause long term adverse effects in the aquatic environment.