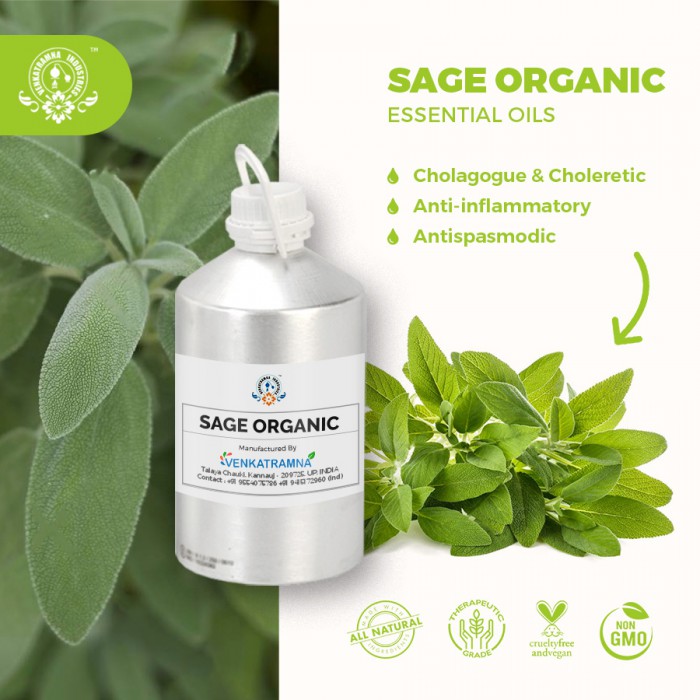 S. officinalis (sage, garden sage, or common sage) is a perennial, evergreen subshrub, with woody stems, grayish leaves, and blue to purplish flowers. It is native to the Mediterranean region, being currently cultivated in various countries. Sage is one of the oldest medicinal plants, and the etymology of the Latin name suggests its healing properties, with Salvia deriving from the Latin verb salvare = to save or to cure, and officinalis also means medicinal.

Salvia sp. has also been used for a long time in folk medicine as medication against fever, rheumatism, perspiration, sexual debility, and in the treatment of chronic bronchitis, as well as mental and nervous diseases. Salvia officinalis L. (Lamiaceae) is a Mediterranean species, naturalized in many countries. In Jordan, it is used in traditional medicine as antiseptic, antiscabies, antisyphilitic, and anti-inflammatory, being frequently used against skin diseases.

Common sage is well known in Palestitian traditional medicine by possessing antimicrobial properties. Essential oil of sage and their preparations are externally used for inflammations and infections of the mucous membranes of throat and mouth (stomatitis, gingivitis, and pharyngitis). Internally, the essential oil is used for dyspeptic symptoms and excessive perspiration.

·        Contraindications Should not be taken in oral doses.

·        Adverse skin reactions: Undiluted Dalmatian sage oil was moderately irritating to rabbits; tested at 8% on 25 volunteers it was neither irritating nor sensitizing. A 24-hour patch test using undiluted sage oil produced one irritation reaction in 20 volunteers. A 65-year-old aromatherapist with multiple essential oil sensitivities reacted to both 1% and 5% sage oil.

·        Cardiovascular effects: A subcutaneous injection of 39 mg/kg of sage oil caused hypoglycemia in both normal and alloxan-diabetic rats after one hour. In contrast, Eidi et al found no significant change in serum glucose levels in streptozotocin-diabetic rats for up to five hours after ip administration of 0.042, 0.125, 0.2 or 0.4 mL/kg of Dalmatian sage oil.

·        Reproductive toxicity: When Dalmatian sage oil (0.25%, 375 mg/kg) was fed to pregnant mice for two weeks, it negatively influenced the distribution of embryos according to nucleus number.

·        Neurotoxicity Convulsions appeared for sage oil at over 500 mg/kg ip in rats. A 44-year-old woman who weighed 133 lb died hours after ingesting two easpoons of sage oil as a treatment for asthma Before dying she suffered epileptiform convulsions. Doctors reported cardiac failure and dyspnea, and estimated that she had drunk 0.25 oz. Post-mortem examination showed only slight damage to the stomach and small intestine. The lungs smelled strongly of sage, and were ‘emphysematous’. No other organ showed any sign of damage. In a second case, convulsions occurred in an adult who accidentally ingested one ‘swallow’ of sage oil. In a third case, a 54-year-old woman ingested at least one ‘swallow’ of sage oil. After 30 minutes she suffered a tonic-clonic seizure and remained unconscious for one hour. In a fourth case, a 53- year-old man ingested 12 drops of sage oil. He rapidly developed a tonic-clonic seizure followed by a 15 minute coma. Neurological tests were normal. In three further non-fatal cases, all in Turkey, accidental ingestion of sage oil by a newborn, a 1-month-old boy and a 5 1/2-year-old girl was followed by seizures.

·        Hepatotoxicity An essential oil of Salvia officinalis with 17.4% a-thujone, 13.3% a-caryophyllene, 12.7% 1,8-cineole, 8.3% borneol 3.9% b-thujone, 3.3% camphor was tested for toxicity to rat hepatocytes. The oil was not toxic when present at concentrations of 200 nL/mL or less. However at 2,000 nL/mL significant LDH leakage and glutathione decrease occurred, indicating cell damage.